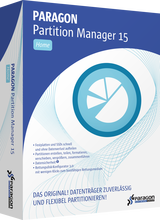 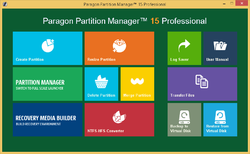 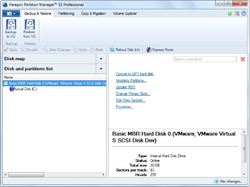 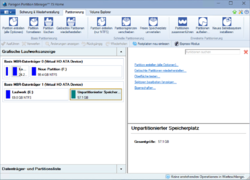 I gave a pretty comprehensive (or tried...) review of Aomei Backupper the other day (wonder if that'll come round again with a fixed key?) so its quite handy that this program has popped up. Although it doesn't have backup capabilities (well, it does, but not in the same vein as Aomei Backupper) creating and editing partitions is always useful.

So a physical hard drive can be split into separate partitions. Each partition is given its own drive letter. This is useful (for Windows users) as they can split the operating system with their data and back up both independently. Having a full backup of the operating system means you can revert back to a point in time if the system fails to boot. When creating an image, this has to be stored somewhere. You can't save it to the same drive as you're backing up to, as it will find the backup its currently writing. Windows will sort of disallow this, but it still causes problems, and its poor space management. If you have (for example) a 500 GB drive, you can allocate 100 GB for the operating system and programs, and 400 GB (or 350 in reality, as a 500 GB drive is never 500 GB!) for data - downloads, movies, iTunes, etc.

Windows will help create these partitions, but sometimes its handy to have extra tools. If you've split the drive 100/400 and later find this is not enough, and you'd prefer 200/300, Windows won't easily be able to help you. Partitions cannot easily be resized. Windows might be able to shrink a partition, but won't be able to move the partition across to allow the C drive to expand. Equally, if you went nuts and created an E partition (for Games, for example) then later thought that was a bad idea but didn't want to lose the games, Windows wouldn't be able to merge the partitions.

This software solves this problem. You can create, edit, resize, merge and split partitions. It also has a boot environ,ment so you can edit the system drive - again, something that Windows doesn't always do that well (sometimes for good reason!)

So onto the software. Paragon do good software but this is a bit bloaty. To be fair, most of the 218 MB download is the Linux recovery environment, but it has many features a lot of people won't use.

Looking at the screenshots, it shows the Professional version, but the headings give the Home version, so not 100% sure which version is here... I assume the Home. Downloading as I'm writing...
There are three versions in total ... free, home and Professional. The Home has significant 'extras' compared to the free - splitting and merging partitions is useful.
https://www.paragon-software.com/home/pm-personal/features.html
'Boot Corrector' is also useful when you use Aomei Backupper to clone disks, as the boot sector isn't always created, or the 'active' partition set. This can leave you with an unbootable operating system. Its a quick fix and a couple of command line tools, but if you don't know what to do, then you could be scratching your head for a while. Admittedly an older version of Paragon didn't fix this issue, and I haven't tested this one. Would be interesting to confirm...

The free version doesn't have the boot recovery environment. Again, this is a useful tool to have in ones armoury.

The interface borrows from the Metro look of Windows 10, which is either a good thing or a bad thing. Personally I don't like them as they aren't keyboard friendly. It does have an 'expert' mode though, which is your more 'traditional' interface.

While this software is useful, I'd have a look at Aomei Partition Assistant (free). Its an 8.5 MB download. When you just want to split a drive, create a partition or resize a partition, you just want a simple screwdriver, not a huge Swiss Army Knife with loads of spoons, forks and pizza cutters on it. Useful to have when you go camping, but not your main 'go to' tool. If that makes sense...

This appears to be neither but the full edition, even the system requiremrnts say:

Implying that WinPE environment creation must be present in this edition. Usually when it is excluded Paragon mention there is no ability to create WinPE boot media boldly in the Description text block and that is conspicuously absent today... and the page about the boot media builder does mention good things like WinPE on a USB stick that yesterdays giveaway was supposed to help generate/convert to...

But when I use the RMB wizard it only offers me the linux iso creation option, no mention of WinPE or the existing installed Windows Aik that is needed under pre-windows 7 installations...

So this apears to be the same as the old style SE variants and not quite the full product. None the less it's still worth having and note it WILL require you to uninstall prior versions of "Paragon Partition Manager Home" regardless if the are SE or LE or full.

This is an excellent product. The only disadvantage of the Home edition (this offer) is that the user can't selectively restore files. And I would think that is probably one of the most important "Home" functions I can think of. It's not always the entire image that needs to be restored - only certain files.

MeloDeasy - Melody Recorder
Recording a melody in a DAW is a real struggle, being in sync with metronome adds extra stress on your performance.
$1.99 ➞ grátis hoje

PediPop Anesthesia
This app is quick and simple to use. Even better, kids love it!
$0.99 ➞ grátis hoje

OLDV - Retro Video with BGMs
OLDV turns the video into a retro feel of the '80s.
$0.99 ➞ grátis hoje